In 2018 and the beginning of 2019 Bible booklets have been made available in Carib (also known as Galibí, Kali’na, etc.), a language spoken by the Carib, American Indian people living in Surinam and neighbouring countries. The Art Bible Child Foundation (ABC) has had translated and printed five parts of the series in a very limited edition of forty copies per title.

This was at the request of a retired Wycliffe Bible translator. For many years he has been translating the New Testament in Carib, and has been doing the work of an evangelist. 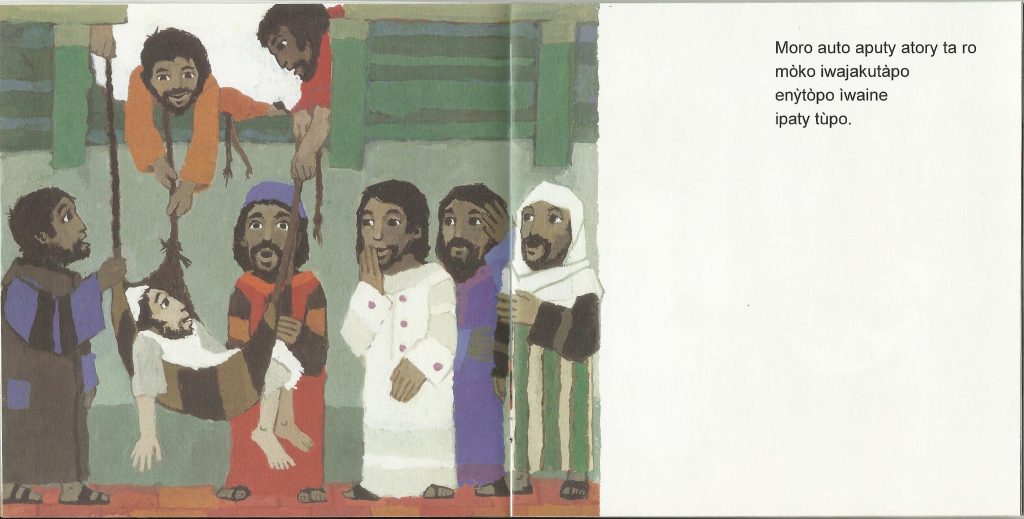 The Caribs have an oral culture, not a written-word culture. Also therefore the little booklets with expressive image language and short texts are more suitable than text-filled reading materials.

The complete Bible passages in the back of the booklets were taken from the Carib New Testament (published in 2003), with permission from the Surinam Bible Society and Wycliffe Bible Translators.

A good translation was made in Surinam by a Dutch Wycliffe linguistic support field worker, with a thorough knowledge of Carib language ‒ moreover having been assisted by his wife who is a Carib native speaker. These booklets can be used for the reading and writing courses, for example.

Translating was done as usual in consult with the foundation. To this end also a literal translation is made of the new text, back into Dutch (or English, French), providing ABC insight in how the new text is following the original one.

The further realization of this special, limited laserprint edition, such as layout, formatting and laserprinting of the texts, was in good hands of an ABC helper, who together with his wife is active in mission work. Already several times before the ABC Foundation has requested his assistance at these editions. For this purpose preprinted booklets with only the illustrations are used. At the time the Netherlands Bible Society has produced these preprinted booklets for the foundation.

July 2018 the first printed title about the good Samaritan has been presented on the occasion of an anniversary celebration in Surinam, 15 years after publication of the Carib New Testament in 2003 by the Surinam Bible Society and Wycliffe Bible Translators.

Thanks to the donators to the ABC spring 2018 collection in the Wageningen Netherlands Reformed Church for this Carib edition project the costs are covered of the preprinted booklets, the laserprint production process, and part of the shipping. The latter costs were partly saved, because the first printed titles could be taken in air luggage to Surinam.