Summer 2017 Jan Gerrit, Pauline van Norel and their four children have travelled to Uganda. The family lived in Northern Uganda from 2000 till 2005, while working for ZOA Refugee Care. 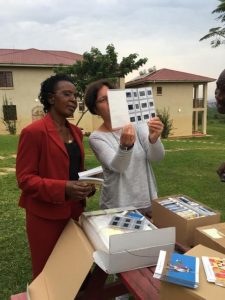 Contact between the ABC Foundation and a Ugandan evangelist date back to the nineties when the Ugandan Christian Harriet stayed in Wageningen for her studies and participated in the ICF church services. She helped to realize the Luganda edition of the ABC booklets. Harriet’s cousin Alice is travelling through Uganda to do evangelistic work and has also used before the Bible booklets and pictures from ABC for her work among children. The ABC founder Cathrien de Stigter-Janse has sent ABC Bible materials to Uganda several times, also because of Harriet’s contribution to the Luganda edition.

The Van Norel’s have saved space in their luggage to transport circa 30 kilogram of ABC materials to Uganda to hand over to Alice. That equals more than 650 booklets, 16 show-and-tell-picture sets and 2 sets of slides from St. Docete. Imagine how many children can be served with a personal copy of a Bible booklet.

Thanks to their offer we were able to save more than 180 euro on shipping costs. Within a week members of the Netherlands Ref. Church donated 400 euro to compensate the production costs of these Bible materials.

We received the following short report from Pauline:

“Before we left for Uganda we contacted Harriet’s husband Paul and a contact person between the ABC foundation and her cousin Alice. We agreed to meet him and Alice in Kampala on Sundays July 23. Fortunately Alice was in Kampala by that time, as she travels a lot as a full-time evangelist. 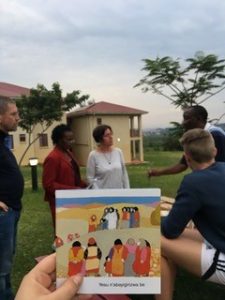 We met in our hotel on a sunny Sunday afternoon.  Because Alice speaks English to only a limited extend and we don’t master Luganda, most of the communication went through Paul. It was a wonderful meeting, in which Alice told us about her work. She travels for most of the year to the rural areas of Uganda to found and support local churches. She is sent by a congregation in Kampala and from there teams travel throughout the country. Especially In areas where churches are non-existent or weak, they are committed to children’s ministry and Bible study lessons. Because of the enormous distances and bad connections, she is away from home for months. Alice was very happy with the ABC materials we had brought her. She unpacked these with a loving hand. Part of these will be used for youth work in her own congregation, but the majority is meant for her evangelical tours throughout the country.

After providing her with the ABC booklets we prayed together for the work of Alice and the teams. We received several bunches of bananas as a token of gratitude and we said goodbye. The booklets are in good hands and we hope and pray they will be a blessing to many children”