Thanks to a collection in the Netherlands Reformed Church in Wageningen, Netherlands, Art Bible Child was able to offer 600 booklets to the team of the Christian & Missionary Alliance in Senegal.

This was enthusiastically received when the team members saw the quality of our materials, ready for use in the French language. 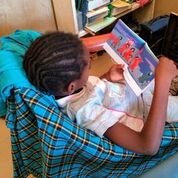 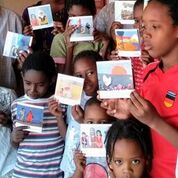 Protestant Christians form a tiny minority in Senegal. Therefore, it is important to the small Christian communities there to give plenty of attention to teaching the Bible to their children. Without exception, every church where booklets were given out responded with great joy. This included churches in the big cities and churches in remote rural areas. CAMA team members took the booklets with them as they travelled to surrounding countries. Senegal thus functions as a gateway to a number of Francophone African countries. There is plenty of scope to distribute more booklets here.

In 2022 sets ABC booklets are handed over to Rita Biesse, een Suisse woman working in a youthprison in Senegal. Currently she tries to discover how the ABC-booklets works best in her situation.

Also some sets of ABC booklets and ABC laminated plates are handed over to Bernard Ciss from Bibleschool Espérance (hope) in Thiès, Senegal. This centre, about fifty kilometers east of Dakar, is set up by missionairs from Central America. They work with children and have a boarding school to which children from the villages are sent to give them the opportunity to visit school. The staff was very pleased with the ABC booklets and plates.

Johan himself uses single copies of the ABC booklets to discuss a particular Biblestory with adults in Senegal. This is a valuable use of the material as well.

Missionairs in Senegal who work with the ABC booklets regular report us that they very much like the pictures of Kees de Kort because for its non-racial determined presentation of Biblestories. This is crucial for missionary work and thus highly appreciated.